At a Glance: Twilight Struggle is a perfect encapsulation of the Cold War: paranoia, provocation, power, prestige and propaganda.

Twilight Struggle is a strategy game for 2 players set during the Cold War where one person plays as the USA and the other as the USSR. Gameplay involves playing cards and placing Influence in different countries around the world. The game is separated into 3 periods, Early, Mid, and Late War, split into 10 total rounds, maximum. The game could end sooner than that, however, as the goal of the game is to reach 20 Victory Points, which are gained in a few different ways. Each round begins with Improving the DEFCON status. DEFCON starts at 5 (peace) at the beginning of the game and may go down to 1 (nuclear war). Certain events and military actions like Wars and Coups degrade the DEFCON status. If you ever cause DEFCON to reach 1 and nuclear war to start, you lose the game. Everyone is dealt a hand of cards and the Headline phase starts. All cards other than regional Scoring cards have an Operations number and event text. For the Headline phase, only the event text is resolved. Cards either benefit the USA, USSR, or both. So in the Headline phase you want to play a card that benefits you. Then, the meat of the game takes place, which is the Action phase where players will be playing cards from their hand and either using the Operations points or resolving the event. The catch is that if you use the Operations points on a card that benefits your opponent, that event still occurs. So in that situation, it is a tough balance of helping your opponent, but not as much as you’re helping yourself. Operations points may be used to place Influence across the map. Influence determines who controls certain countries and whenever the Scoring cards are played for each region, each player has a chance to score Victory Points at that moment depending on how much they dominate that region. Operations points are also used to try to overthrow control in countries by rolling a certain number for Realignment or attempting a more aggressive Coup. You may also use a card to advance on the Space Race, which gives you special advantages if you get to milestones first. And the other cool thing about the Space Race is that the event text does not happen, so it is a good way to get rid of a card that would really help your opponent. Players alternate playing cards, using Operations points, trying to spread their Influence around, and resolving events that help each other. After the Action phase, you check the Military Operations Track (you must complete a certain number of militaristic actions and if you don’t you receive a penalty). Then, the next round begins. If no one reaches 20 Victory Points before the 10th round ends, then whoever ends up on top in final scoring is the winner. 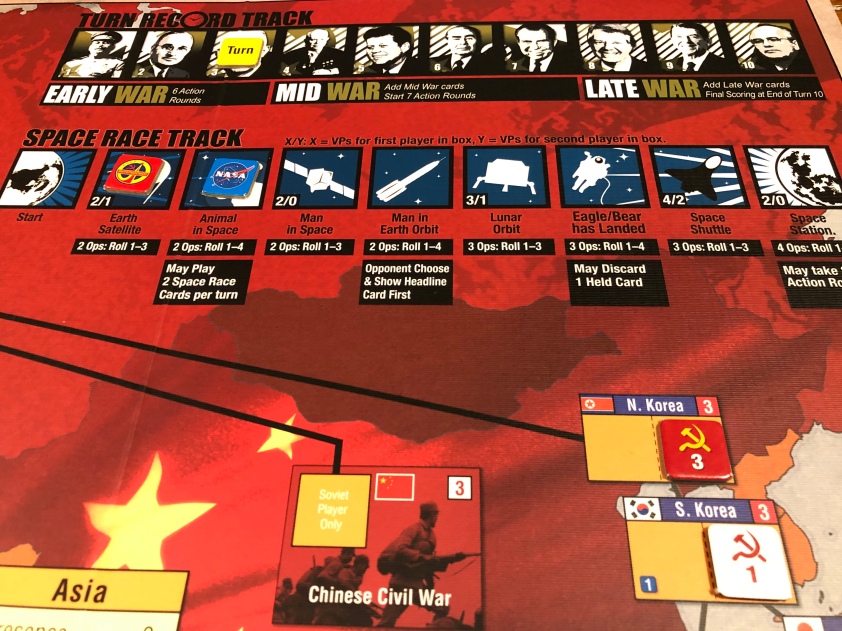 You would be hard pressed to find a better strategy game with a historical theme. It is so thematically sound, it is educational. Instead of nondescript chits on a map, it actually feels like you are playing through the Cold War years, albeit an alternate history, so to speak. There are literally thousands of options on your turn. And that may seem overwhelming, but it is also very freeing. Depending on what cards you have, things can go in very different directions from game to game. Do you try to penetrate the superpower’s hold on their side of Europe? Exercise your Influence over the Middle East? Advance on the Space Race? Attempt a risky Coup? If this topic interests you, you will find so many things to appreciate about these options and all they included in the game. I enjoy the way the Action phase works where you REALLY don’t want to play cards that help your opponent, but it is inevitable, so you have to make those Operations points count. The Space Race is a nice separate mini-game, and I really appreciate the way the current DEFCON status affects what you can or cannot do in certain regions, like making Coup attempts in Europe. The battleground countries end up being great tug-of-war matches too. Sure, it is certainly not a casual, beer & pretzels type game. Your brain will be firing on all cylinders. The tension is palpable. The paranoia is real. 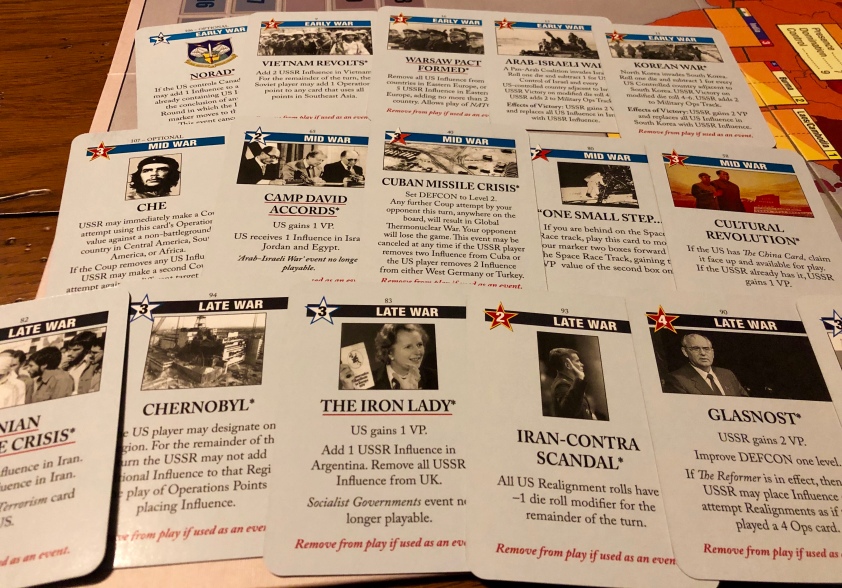 The deluxe edition is very nice, and has a giant board. There are plenty of reminder tokens for different events that have lasting effects for instance. The cards are very thick, and would be hard to ever wear out. The rules are laid out more like a conventional war game would have, and I would definitely recommend watching one of the good video tutorials on YouTube before playing. What’s great though is that the game is actually fairly simple once you familiarize yourself with the first play. But the strategic and analytical depth is astounding. Generally, you might have a good idea if you’ll like this before you even play it, based on the theme and heavy strategy style. But if this really interests you like it did me, try it out! This one is a LEGEND.