At a Glance: Lord of the Rings gets a head start because of the theme, and its epic urgency of gameplay backs it up.

Lord of the Rings is a cooperative adventure game for 2-5 hobbits where the fellowship’s goal is to destroy the One Ring in the fires of Mount Doom. To do this, the group of hobbits must progress across a few scenario boards that match the storyline of Tolkien’s trilogy. Players must collect cards and play them at opportune times in order to progress through the story and resolve Conflicts. Throughout the game, due to events and the power of the Ring, players will be moving on the Corruption track. Sauron is also on the Corruption track and consistently inches his way toward the hobbits. If Sauron overtakes any of the hobbits, they are eliminated from the game. If the Ring-bearer gets overtaken, then Sauron obtains the Ring and the group loses as the world plummets into despair and darkness. The hobbits win if they are able to destroy the Ring in Mount Doom.

There are a lot more rules and details, but just know that the theme of Tolkien’s story is represented well in the many aspects of the gameplay. I am a big Lord of the Rings fan, so right off the bat, the deep thematic ties appeal to me. The cooperative nature of the game also enhances the experience where a competitive aspect would fail, I think. The sense of impending doom is well featured in the Corruption Track, as Sauron is ever advancing. For each Conflict, there are different tracks that show progress, and an Event list. All of it works together to form narrative cohesion. And the fact that the hobbits may still win even if one or more of them don’t make it creates situations where someone may have to make the ultimate sacrifice to help save the group and accomplish the quest. It’s intense, emotionally engaging, and wonderfully thematic. By the way, if you were wondering, “wait, who’s the 5th hobbit?” They added Fatty Bolger, which is a departure from canon, but he is ONLY to be used to accommodate a full 5-player game. Not a huge deal. 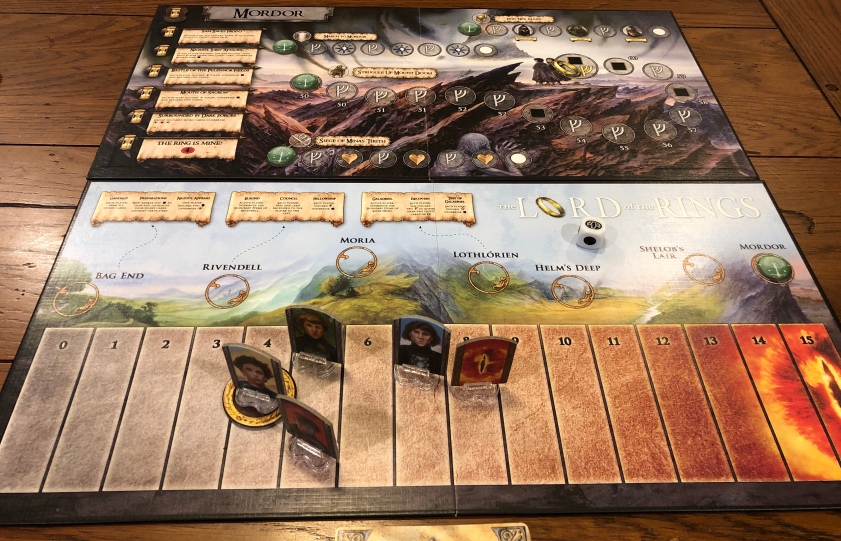 Components are fine, probably not amazing, mostly due to the fact that the quality standard for board game components have largely improved since the year 2000, when this game was published. The artwork and layout of the various boards are great though, I think. Because it has been out awhile, the game is no longer in print, but used copies can be found, and not outrageously priced. This is a really good cooperative adventure, and I would say is a must-try for Lord of the Rings fans. “It’s a dangerous business, Frodo, going out your door. You step onto the road, and if you don’t keep your feet, there’s no knowing where you might be swept off to...”