At a Glance: This peculiar tabletop version of Curling may not be as “cool” as the Olympic sport, and may not involve brooms, but it is still surprisingly fun.

The actual sport of Curling is played on a long rectangular area of ice, with a bulls-eye target at one end. Players attempt to slide big granite stones down the alley and stop as close as they can to the center of the target (known as the “House”). Other team members use brooms to sweep the ice in front of the stone in order to influence its trajectory down the ice. This tabletop version captures the main essence of the game, despite lacking the scale, ice, and brooms. The truth of the matter is, that most of us will never get the chance to play the actual sport in our lifetime. So for those of us who love watching Curling every 4 years, playing a scaled down version on a table that follows the same rules and involves the same strategies…turns out, it’s a lot of fun! 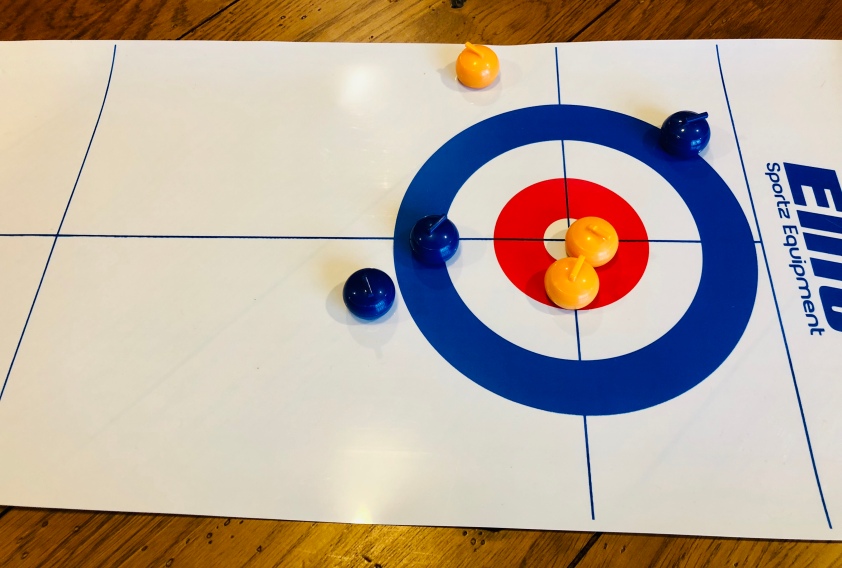 This game handles anywhere from 2-8 players, split into 2 teams. Each team has 4 stones in their color. The teams alternate sliding the stones down the glossy plastic “ice” sheet, and try to get as close as they can to the center of the “House”. Players can try to knock other stones out of the way, or try to place stones so that they block other players or protect their stones that are in good position. Stones that do not pass the “hog” line are invalid and are removed, as are stones that go too far and cross the backline. Once all 8 stones have been slid, teams score based on (1) who has the stone closest to the center, and (2) extra points if they have additional stones that are closer to the center than their opponent. In the picture below, for example, the blue team would score 3 points since their 3rd closest stone is still closer than the orange team’s closest. Each round is called an “end”, and you play to a predetermined number of ends (usually 8 or 10), and total the score.

I was simply amazed at how well this translated to the table. The components are very nice, and it works because each plastic stone has a metal ball-bearing inside them, so they slide really well on the slick surface and they still have a weightiness to them. It takes a few tries to get the feel for how far the stones slide, and the right amount of finesse to apply. The plastic mat rolls up and can be stored in the box, so it is very portable. The edges of the mat tend to roll up on the sides just a bit, but I’ve actually found that this can make things more interesting, causing the stones to “curl” a bit if you do it right. Sure, this might stretch the definition of a “board game”, but it can be played on a normal table, and I just have to share about it because I enjoy it that much. It really exceeded my expectations.

I could not find the edition with the box that looks exactly like ours on Amazon, but the components look exactly the same. I mean, check out the Amazon reviews. It really does work better than you might expect.

Affordable, especially for the quality! https://amzn.to/2A59lQk